Turn of the Key is a mystery thriller written by Ruth Ware. The book is composed of several letters mostly written by the protagonist, Rowan Caine. When Rowan finds  an advertisement for a full time nanny position in the Highlands of Scotland with great pay, she cannot believe her luck. She gets hired and begins this new chapter in her life soon afterwards. She is to watch 4 girls, ages 1, 5, 8 and 14. The house where she will watch the girls is super high-tech, full of cameras and said to be haunted. Several other nannies have fled, none lasting more than several weeks. Little does Rowan know that the house has a lot more secrets than just the hauntings.

SPOILER ALERT! DO NOT READ ANYMORE IF YOU HAVEN’T READ THE BOOK!

I really enjoyed this book overall. What I didn’t enjoy was that this whole book is basically a letter from Rowan behind bars writing about her innocence to a lawyer. Yes, the whole book is a letter, and Rowan became quickly annoying because she wouldn’t get to the blooming point of the murder she was charged with. This just made me read even more, which I think was the intention of the author. The ending was great and the twist at the end was also perfect. I didn’t see it coming, but Mrs. Ware does leave some of the ending to our own imagination. What did happen to Rowan in the end? What happened to Ellie? Did she get the help she needed? Living with such a burden is bound to cause a lot of mental torment in such a young little girl. Mrs. Ware doesn’t answer those things in the epilogue. We are left to guess for ourselves, and that leaves for a great conversation with this book’s fans.

As a Christian, what I noticed was that the book had a lot of profanity in it and Rowan is a liar. The teenage daughter, Rhionnan is very wordly also. There is the pain and baggage that comes with adultery and that is where I want to focus on in this blog post. There are two men in this book that are developed into characters. Both of them are the opposite of what God expects them to be. They take advantage of the women they are meant to protect and are scoundrels. The mess they leave behind because of their need for immediate gratification are a bunch of hurt children and broken homes. That is what adultery does. It shatters those we love and exposes the soft core of their hearts. Rowan is broken. The Elincourt girls are broken. Sandra, the wife, becomes broken. The wife of Jack becomes broken. These men are worthless in this book.

Books allow us to see into how the world interacts and lives its lives. We get a clear picture of families and how they deal with the pressures of day to day life without God. Yes, some books we read may have a faith element sewn into them, but most secular fiction books do not. I see in books like these, I really am not missing out on much. Yes, believers and the lives we live can be dark and yield forth bitter fruit, but the world yields way more and frankly it should since they go against what God says is right. This reminds me of Psalm 37:1-2 – “Do not fret because of those who are evil or be envious of those who do wrong; for like the grass they will soon wither, like green plants they will soon die away.”

I recommend this book to anyone who likes mysteries and or thrillers. This book did have a Gothic feel also, so if you are into those, you will love this book. If it wasn’t for the frustrating narrative of Rowan, I would have given this book a 5 stars on Goodreads, but I gave it a 4.

The book is scary and frightening, I would only allow my older teens to read it. There are no explicit sex scenes. There is cussing throughout the book.

I wanted to start writing and critiquing older movies that I have never seen that maybe I should have seen already. So when I saw this movie available on Prime Video, I decided to watch it as I folded laundry and wiped down counters. I also, regrettably, ate lunch as I watched this gory tale. 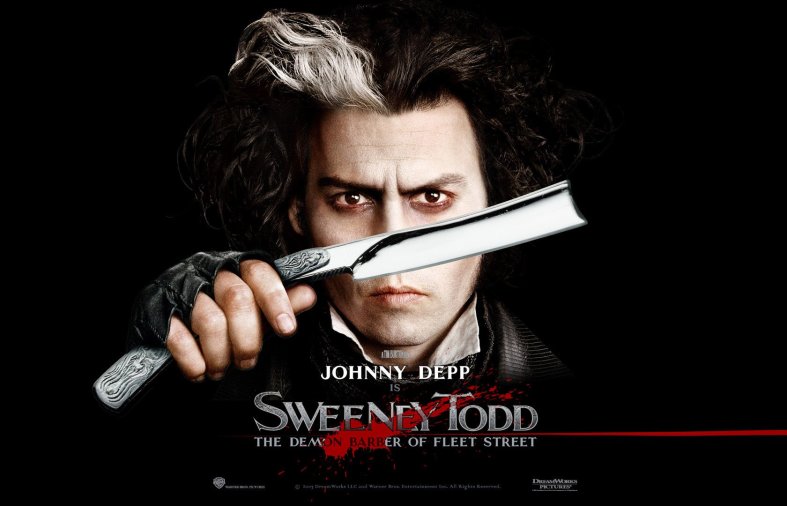 I didn’t know that this movie was a musical! The genre I can’t stand the most is musicals. The songs just seem so conflicting and in “Sweeney Todd” it seems to clash even more just because the genre is so dark and the songs are a bit silly. But leave it to Tim Burton to do just that. With movies he directed like “Pee-Wee’s Big Adventure”, “Beetlejuice” and “Charlie and the Chocolate Factory”, Mr.Burton is no stranger to combining the weird and the dark.

I hated the songs. And there were so many songs! All the time! There was no rest from them! I also didn’t care much for the gore either. I somewhat knew the story of Sweeney Todd, but the bloodshed was preposterous at times. It was about the 30 minute mark that I checked the rating on the movie because I just couldn’t believe this was a PG-13 movie, and lo and behold it wasn’t! This movie is rated R for graphic bloody violence!

But I didn’t hate all of it. The story line was one of total depravity. The lack for human dignity that Mr. Barker/Sweeney displayed and his vengeful and unforgiving spirit caused him to destroy the things he loved the most.  What a wretch of a man! He needs an even greater Savior, but like all tragedies, he finds none. He wallows in his self-pity. He destroys any good thing he receives and lives in the memory of a romanticized past.

I do not recommend this movie, even if you like musicals. It was awful. The songs were horrid and I felt a little dirtier after watching this movie.

The movies produced by Netflix are getting better and better visually. I remember the days when a mini movie series would come out and it was nothing compared to what we would see on the big screen. Times are changing.

“Alias Grace” has beautiful cinematography. It is a story about a young woman and the hardships she faces as an Irish immigrant. She is charged with murder and the movie goes back and forth from the past to the present as she re-tells her story.

This series is rated mature for its adult themes and gore. Thankfully, there wasn’t any blatant nudity. There are several times Grace is molested and one sex scene involving fully clothes people.

Sarah Gadon did a great job in portraying the very complicated character of Grace Marks. I did find the acting of Dr. Simon Jordan a bit sub-par. I am not sure if they were trying to portray him as a bore, but he was rather dull and his voice was monotonous.

There have been many who say this movie shines a light at the horrible plight of women in a man’s world and how we still have to suffer these prejudices today. As a woman, I really don’t see it today. I am not naïve to the misogyny against women in the past, but today? I just haven’t experienced it. I can not think of one person or institution that has oppressed me solely based on my sex.

To me, this series wasn’t advocating for women’s rights today, it was speaking of the horrors done to a woman in a time when women had to endure so much because of the lack of resources given to them.

“Alias Grace” is a somber movie. The colors are dark and grey. It is not a thriller but a true mystery. The end is what I had guessed about half way through the series, but it was still a great story.

I recommend this movie to those who like gothic period movies or historical fiction.

You never know what you're going to find at the gas station! I love seltzer water and this was delish!!!
Squeal!!!!
Red spider lily.
Menudo anyone?
I have the pool all to myself!!
Had some grilled lamb today. The rice and dressing were incredible!!

Just life through the eyes of a Christian.